(and check out my cheap and tacky rhythms!)

Sadly we couldn’t make it to the first night 😦 [we’re a bit renegade] but we heard that it went off BIG TIME! But we’re here now and it’s Friday night! And what we see on display is what we like. It’s an extravaganza! And the lineup looks badass!

Dis-charge is glamorously dressed up in a long, long, loooooooooong shiny dress with a big, badass bottom. The slender and mahoosive image is joined by huge, huge, hoooooooj heels, and a headdress with flowers and all kind of other mystical mumbo jumbo dotted all over it [text not really doing it justice, let’s face it] (look at the picture) but anyway… 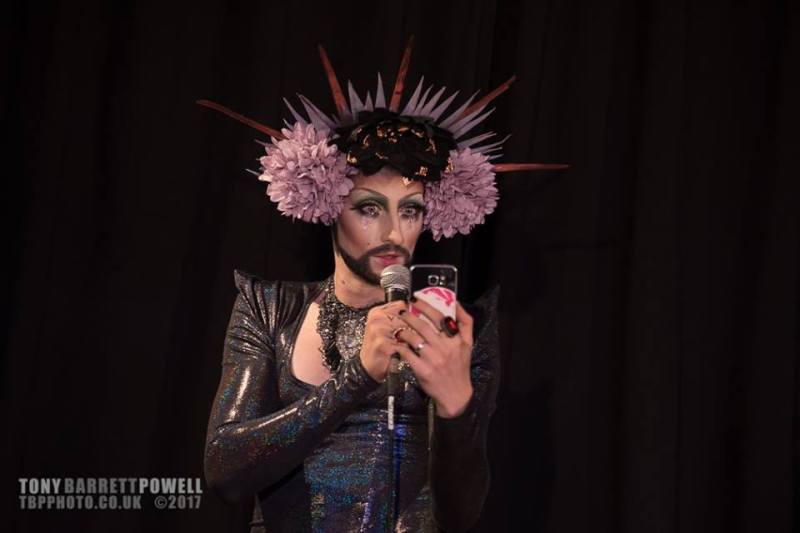 As the host, the boss, the big kahuna…Dis introduces us to the show…

Dis: “Ladies and Gentlemen, welcome to the Bristol Burlesque Festival 2017…tonight you’re going to see some renegade stripper action…we have performers from all over the world…America, Germany, Norway, and from the UK as well.”

“But first up, the act we’re about to see has something to do with the pole that’s been standing freely in the centre of the stage…it’s…”

Anna moves up and around the pole…

Then out go the legs:

Anna swings back in, curls around the pole, contorts her body around it’s silver erection, coils herself upside down and twists herself around…

What awesome fun! And a huge dose of badass pole dancing mayhem. And we fucking love that HEEL SLAP!

Dis: “Did I not tell you it would be great!” says Dis, pulling some kind of face. “I look so hot when I make that you face, you just want to fuck me!”

Dis: “So anyway…why Renegade strippers? The performers we’ve selected are broadly speaking the perfect embodiment…all different styles and personalities and aggressions…after all…it’s a fucked up world!”

[Song: Every Breath you Take by Sting]

There’s a hat stand on stage dressed up as man…hat, coat, trousers, the works… 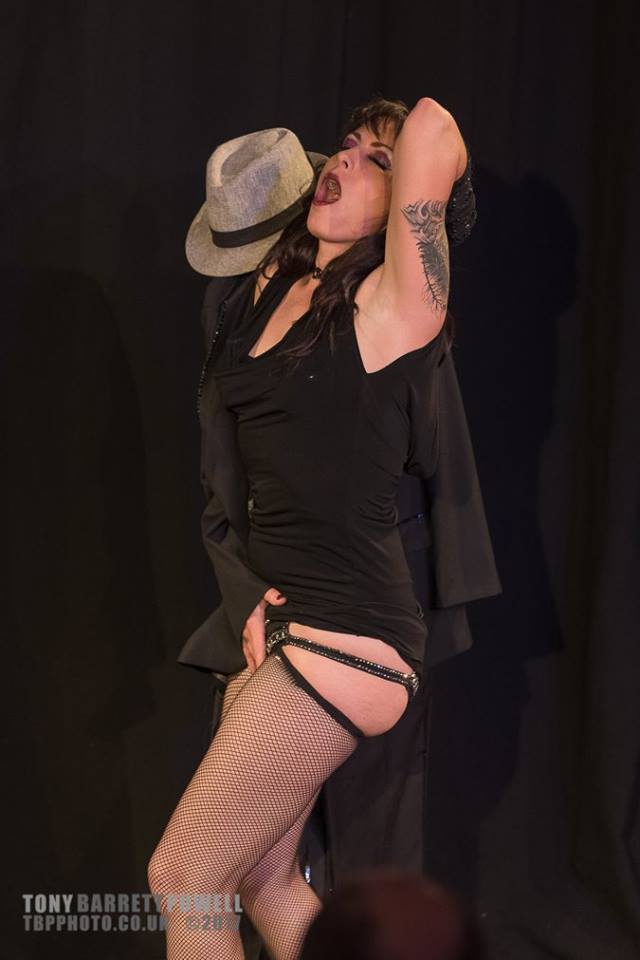 Frankie moves, twists, turns…slinks her body up the man…she puts her hand inside his jacket…slides inside…places the arm around her shoulder…

Now the hand is right down on her V!

The dress comes off, flung wildly across the room…Frankie goes down…peeks into the man’s trousers…looks back at the audience:

Who, it appears, is talking about himself…

“I want to have some screaming from the audience…One, two, three…”

“Ohhhh, I felt that down in my special place…”

Dis: “Two days in and I need a thesaurus! I’m a shit drag queen but I’ll try and do my best! But now it’s time for our next act…”

Disco funk breaks out of the stereo…

The dress comes off…

This is some tight funk, tight moves too!

Now to add some bottom!

Dis: “Costume change! Now you can see my power shoulders!”

[these are shoulder pads with pretty BIG SPIKES ON THEM!]

“It’s a two hour journey of me re-arranging myself! I have half of DFS in me…there’s a chaise longue I won’t give back!”

“Snapchat! Are you all excited…I’m going to scan through the crowd…scream for me!”

“But that would be vulgar…don’t you know I’m the Princess Di of Drag!”

“So anyway…our next act…it’s a journey…you get the offer of one pill or the other…maybe both and be like YAY! MEH! YAY! MEH!”

Hmmmm…I do love a shit load of PVC…wonderful sound…reminds me of a skirt I once owned…and a few pairs of trousers…and a very naughty New Year’s Eve…Squeak, squeak, squeak…(but that’s another story 😉 )

Rage Against the Machine blasts from the speakers… 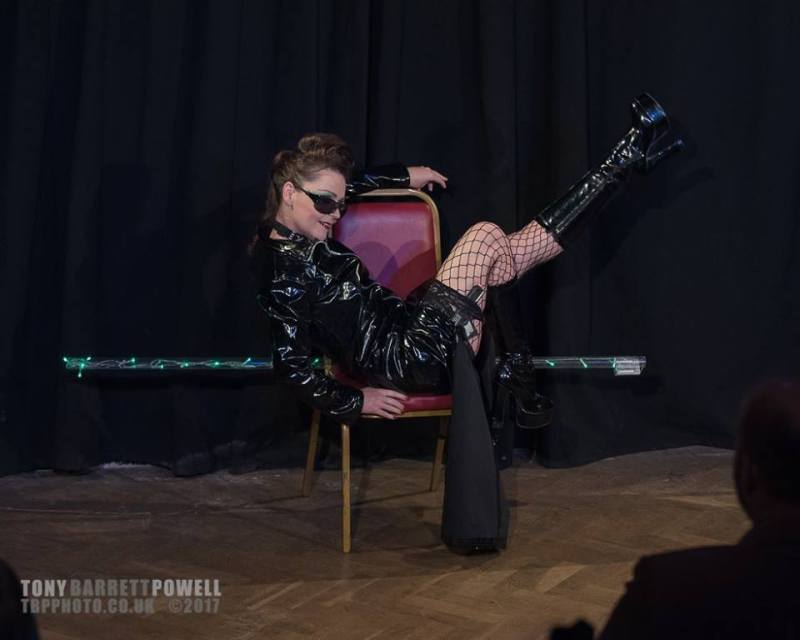 Coat off! PVC bra underneath! Lovely. There’s a bustier, too, and a glittery bottom!

Now the suspenders are off!

Bonita drapes and writhes herself over the chair: sexiful, feisty, badass, mischievous…..

Dis: “That’s what happens when you take both pills!”

(not a bad outcome)

“Our next act is someone that will blow your mind! A go-go dancer…a fucking goddess!

The song Mustang Sally rips out around the room…

Velvet has a glittery chest…

…calling up the crowd… 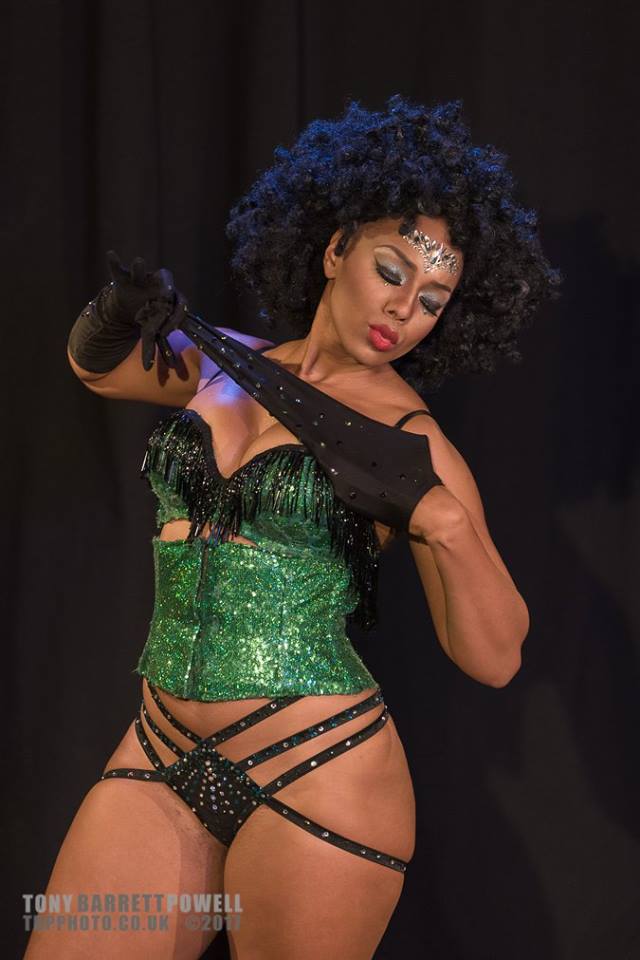 (One more for luck…)

That was fun. And exhausting. And only one half of the show!

It’s time for a break.

There’s a table with jars of sweets and knick-knacks and all kinds of cabaret flotsam and jetsam sitting on the stage… now what is that for I wonder?

Dis: “Are you all feeling suitably lubricated?”

Clearly they’re pissed as a fart… must be all that cider and West Country moonshine…[I was born in Suffolk, so I think I can get away that comment. East Country, West Country… we’re practically cousins. Shit, we probably are!]

And now what is Dis-charge up to? Some kind of kinky walk?

He’s hunched witchlike and prancing a little bit… which is probably pretty apt!

Dis: “I’m cultured… and collecting cultures… this dress is full of them!”

Bettie wanders on and over to the table. She’s wearing glasses, has darning cotton in her hair…all in all…she’s arty-crafty!

Some rumblings in the audience…

“Tonight I’m going to teach you how to make a piggy bank!”

Bettie swoops for some of the items on the table…

“Grab yourself a bottle. If you’re thirsty, drink it first!”

“Cut yourself a nice fat body…”

This is all going crafty so far. But now a different kind of crafty…

Bettie starts pouring glue over herself: up her arms down her top – it’s a cheeky glue-o-rama!

And the clothes come off…

Tons of glue going on!

Bettie Pig has has has…

Glitter all over herself!!!!

Dis: “Now you know how to make your own piggy bank!”

“You get hot and sticky and then take off all of your clothes!”

“Party in the front!

…Party where I can get it!”

Dis stretches this way, extends himself…

“I’ll be like this for the rest of my life!”

“What can you see?

“Our next act is one of the founding members of the BB… fabulous, dishy, debonair… it’s…”

Wow… what is this? It’s a JELLYFISH! This is fucking cool!

Tiger Tiger rumbles towards the audience…

There’s a big, huge tune bursting out of the speakers…

Tiger Tiger calls up the crowd… speaks the words…

[time to feel the groove]

You can’t tell from the text but Tiger Tiger’s performance is an explosion of chaos! It’s mayhem, gorgeous, outrageous, mayhem!

[And I really must find out that tune!]

Dis: “So now we’ve got something political… a special guest for you… it’s the rock ‘n’ roll chancellor of Germany…”

Now this is something else… Angela Merkel: red jacket, black trousers…

There’s a bit of electronic music from Peaches: bip-bip-bip-da-da-da-da… then a BIG RIFF!

Which is good because Angela has got…

Angela begins to strip: trousers off!

Angela’s down to her bra… which is covered in what looks like sweets. But there’s more… there’s a flag, no… a banner coming out… ta-da!

Draping it around herself it reads…

[WIR SCHAFFEN DAS]
(We Make It)

But before we can catch a breath it’s…

Dis: “Now we have one of the founders of the festival… put your hands together for…”

Tuesday romps onto the stage… dark hair, pink gloves, leopard print get up…

[I jus want my pussy ate]

There’s glitter all over!

Tuesday gets down on the floor, bottom to the crowd…

[I jus want my pussy ate]

The words do not do it justice but it was a pure Molotov cocktail!

Dis: “I think we have time for one more act for you… welcome with rapturous applause…”

The boas is unleashed, crawling its way through the scalps of the audience…

This performance is all freestyle jazz dance that says ‘do as you please..you don’t want to feel confined..’

Clothes are coming off… glitter explodes into the front row…

CHAMPAGNE blasts into the air and all over Marea…it’s a shower of bubbles and glamour and sheer delectable ecstasy!

So there we go. That was BBF RENEGADES. With so much going on stage it’s difficult to capture every single little thing. That’s the sign of a great show featuring an incredible lineup.  Thank you BBF!