Disclaimer: We don’t have any show pictures, but we do have some funky backstage Polaroid poses!

We haven’t quite dressed for the 1980s: we’re more west London 1979 – home of The Clash. So we’ve gone for a black vest, black boots, black leather trousers, and a black trilby and scarf. Kind of Punk Sinatra he he! [though it’s more punk as I loathe Sinatra!]

Anyway, let’s get into the show before we have to Turn Back Time…

Ahhhhhhhhhh, hang on. The turning of time has already started, and it’s creeping out of the speakers!

It’s also wandering onto the stage in the form of CHASTITY BELT!

Chastity is dressed up in satin and glitter and sequins and … what else: red pumps, crimped hair; she’s the perfect embodiment of that glorious fashhavoc decade. 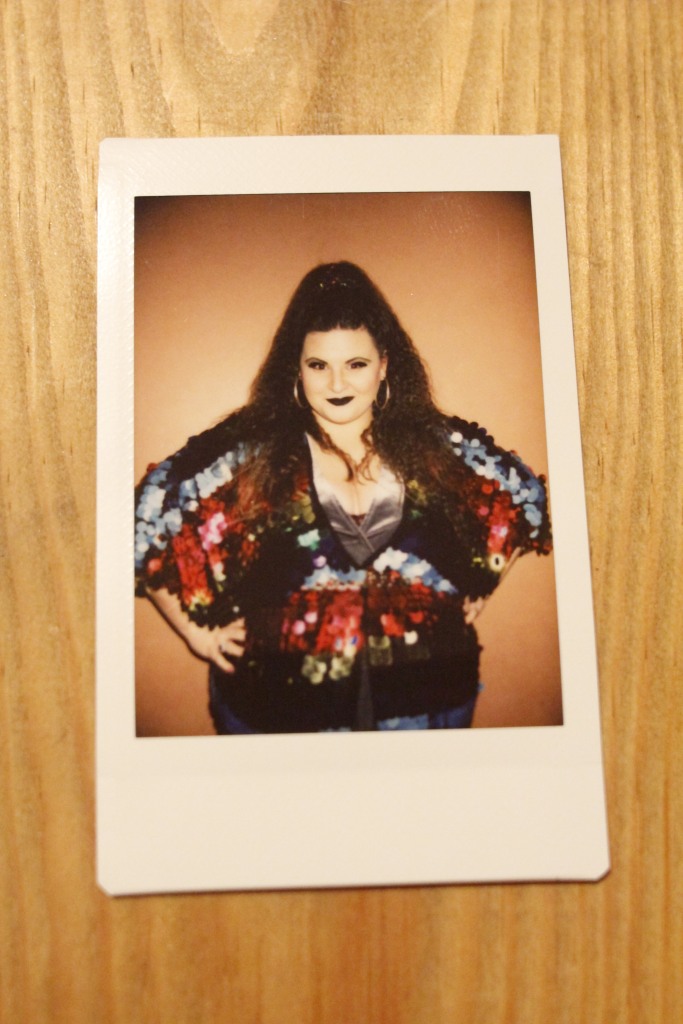 “Good evening, are you feeling good?” asks Chastity …“Are you ready to turn back time?”

Even if we’re not, which we are, she’s heading wickedly into the song, which is good. Fine singer.

Chastity steps down and into the audience, venturing like an 80s satin sorcerer. The crowd claps in time to the music.

“Holy smokes that was a lot of hand waving … I’m your over crimped compere. I know you’re bijou this evening…”

Chastity: “Can we have a round of applause!”

“My darlings,” says Chastity. “Our first performer of the night is funny, sassy … and a little bit snazzy … Ladies and Gentlemen…”

And on she comes: welders mask, glittery gloves, some 80s music out of the speakers…

[Music: What a feeling]

The flames burn, recede into a glove tease…

The welders mask comes off… 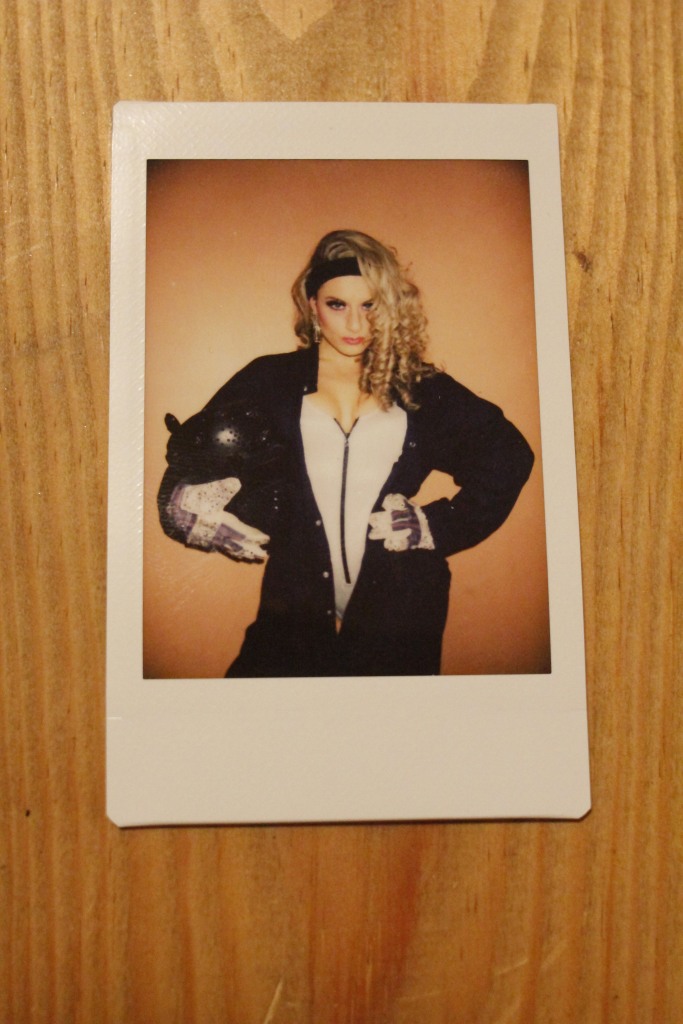 Ah, some gym moves! Swinging, dancing, prancing like a panther!

Ooh La Lou tears her leotard off! And away it goes: flutter, leotard, flutter!

She’s got a glittery thong underneath! Wow!

Ooh La Lou fixes the mask back on and begins to angle grind her way off the stage … sparks, fire, one hell of a can-heated hellfire!

Chastity: “This is what we do, darlings! Performers come on and take all of their clothes off … that’s how it works!”

“By the way,” says Chastity, pointing to her crimped hair. “This hair took me eight years!” So enjoy it!”

“Clap! Stamp your feet! Throw your hands together for…”

And on wobbles Tina: a little old, a little weary, her clothes a little dreary. A tabard hanging from her neck – a tray of tea shakes in her hands as she shuffles towards a chair at the centre of the stage… 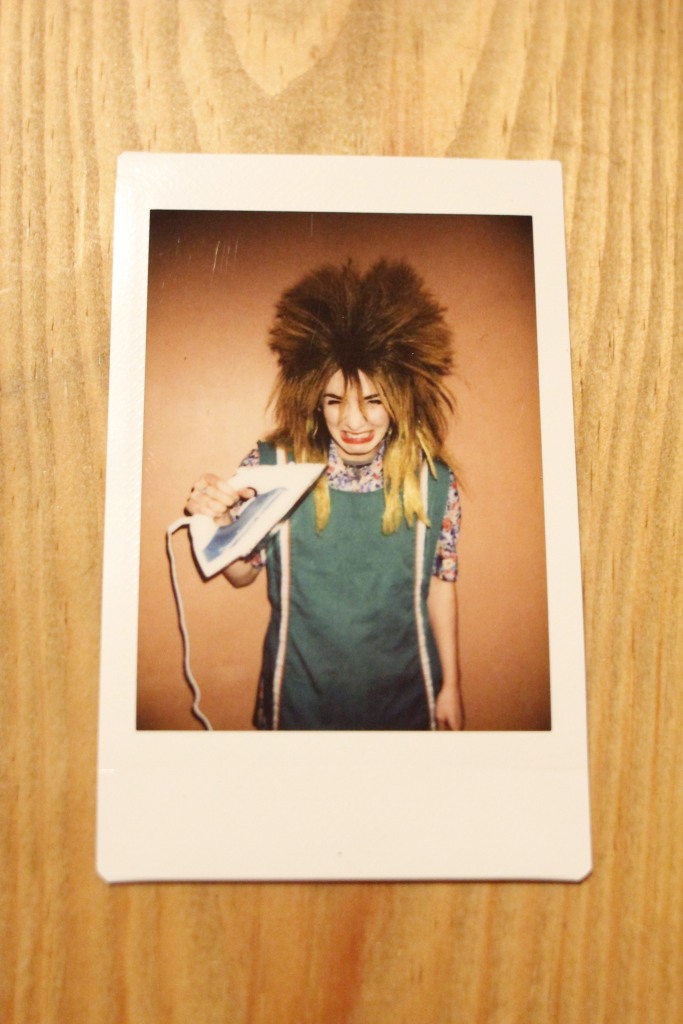 Placing the tray down on the chair, Tina picks up the microphone and…

“HELLO! … let’s get acquainted. HELLO at the back, HELLO in the middle, HELLO at the side. You wanna hear a song?”

“Working in the city … rolling … rolling on a river…”

“Who remembers the eighties?”

I just about do!

“The glory days are over for me now. I give my life to tea. When I get home I don’t have shit to do. I bake away the sexual frustration. Do you wanna see it?”

Tina shuffles off to the side of the stage, comes back with a big cake for the audience…

Tina sings about her cake:

“I thank you, Brighton…”

“I’m gonna come back with some more tea and seduce you later. Bye!”

And off she goes. Oh, here’s Madonna Mae Lenman – the producer of the Hundred Watt Club. Now what’s she up to? 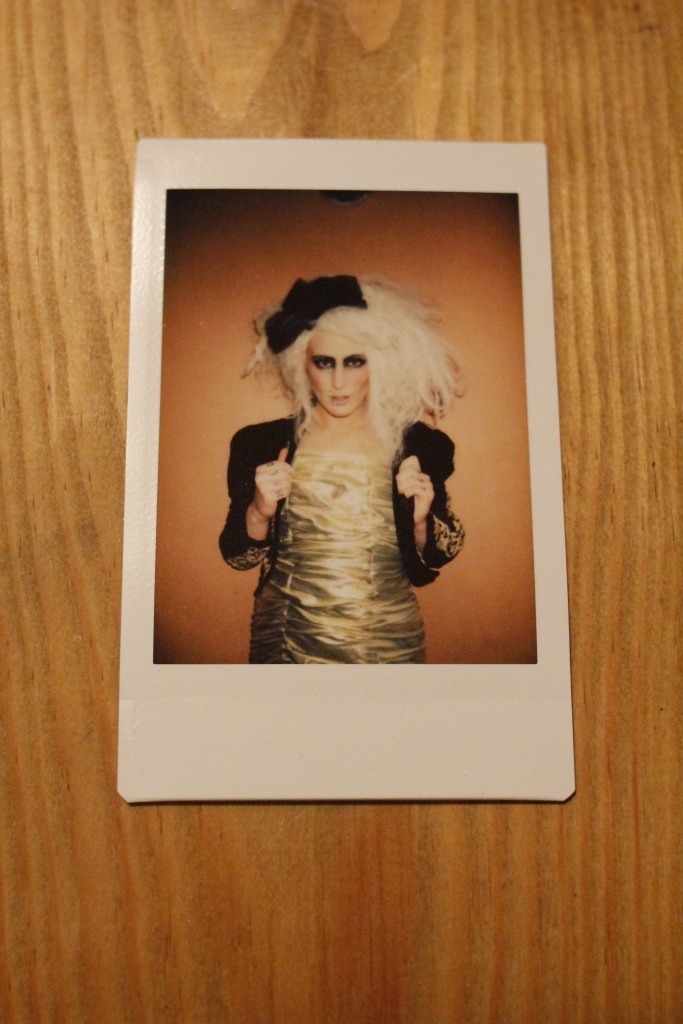 Chastity: “Our next performer. I don’t think it’s going to go well … don’t feel pity for her … give it up for…”

Ohhhhh, he she comes, looking like all that is 80s and nerdy: big librarian glasses (my mother had some of those), crimped hair, a Rubik’s cube. And she’s bringing some music with her: Hip to be Square. Ah, cunning! Cunning like a cunning Rubik’s cubist, which she is: twisting, turning, the cube’s face returning… 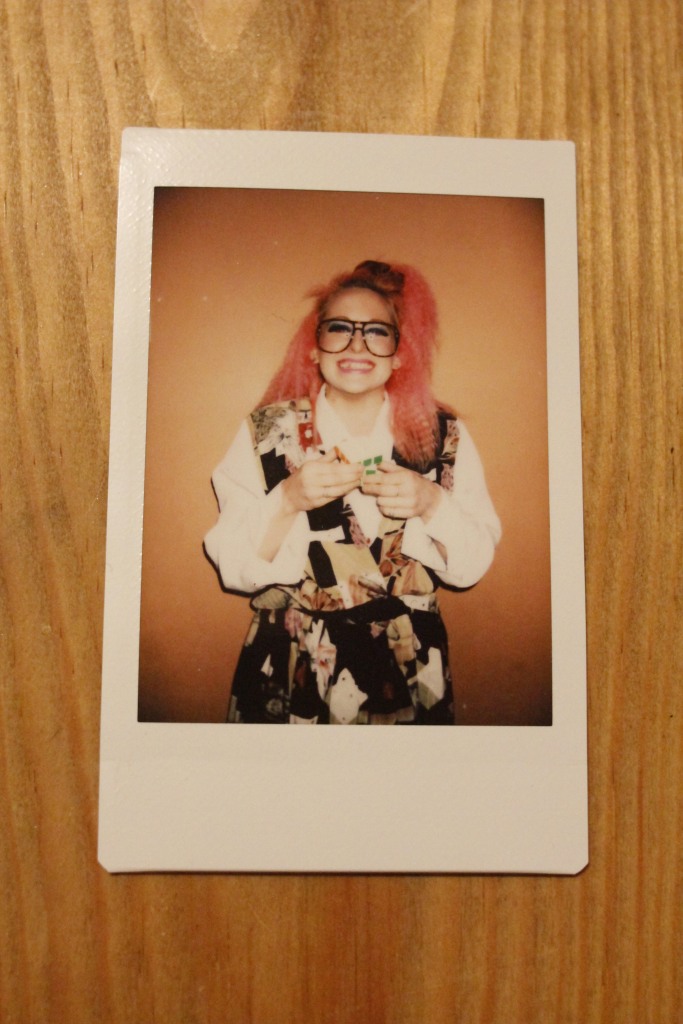 A little twist – Top off!

A little turn – Clothes off!

Chastity: “Ohhh, my God! Are you having fun at the cabaret?”

“Something tells me you need an element of a cool circus! If this is the case then you’ll enjoy our next act!”

What’s she gonna do? She’s gonna hula hoop! I do love a hula.

But Daisy’s a little hungry … [Song: Hungry Eyes] she’s giving that hungry with the hands around the stomach motion … but how can she perform while hungry?

She can’t! So she’ll eat while performing!

HULA-HOOPS! (the crisps, not the big ones)

KABOOM! Hula hoops crisps all over the floor!

Swings arms up and out! The hoops are winging their way today!

Cock-a-Hoop! [not a euphemism]

Swinging, spinning, hoops are ringing around her body!

Ah, now here’s Madonna Mae Lenman. What’s she doing? She’s chucking hula-hoops (that’s the crisps, not the big ones) through the gaps into Daisy’s face…

And she’s off – leaving the stage decorated in discarded, yet strangely ornamental, hula hoops (the crisps, not the big ones)

But so are we!

The lights go down, the shoulder pads pump back up. And so do several hairstyles. A lot of hairspray in the audience tonight. Bounce, darlings, bounce!

Chastity Belt walks out on stage in a glittery jumpsuit: that big voice opens up, stretches out across the room…

Chastity wanders into the audience … an audience that is madly waving its hands in time to the song.

Chastity: “Are you feeling good? Who out there is feeling sensual?”

A big whoop from the crowd. It’s a whoop-whoop kind of crowd tonight.

Oh, and out of all that comes another act. Cabaret’s a kind of magic, don’t you think?

And Lena’s got her gym shorts on this evening, and a fetching CHOOSE LENA t-shirt. Lol

She also has BIG hair … [MG: not quite big enough so try this…]

Lena starts to work out … some stretches, some more stretches … some BIG BIG SPLITS!

Dancing off the stage and into the audience, Lena slams her arms down onto a table of people…

Ha ha! The biggest bloke of the lot has been challenged to an arm wrestle…

MG: We’re not going to tell you who won … you’ll have to ask Lena 😉 [Tweet and Facebook and Instagram The Hundred Watt Club to find out]

After all that arm wrestling fun and games, Lena has managed to get back onto the stage … it seems this work out comes with some teasing … clothes go flying…

And flying some more!

But with the clothes going off, Lena’s working up a bit of a sweat…the water’s coming on…Lena pours a bottle all over herself! It’s like an 80s pop video…the kind that killed the radio star.

A feisty workout throughout!

Chastity: “It wasn’t all camp shit in the eighties … a little bit of rock and roll for you…”

Ohhh, Daisy has glow in the dark hoops, and they’re spinning furiously … and strobing, too! How wicked!

We have indeed been Thunderstruck!

Chastity: “I had this outfit made specifically for this show. If you’ve turned up dressed up – march yourself up to the stage now!”

A handful, no, make that nearly two handfuls of ladies power march up to the stage in their eighties getups. They look good, and there’s eight of them … which is appropriate.

So what do we have here? Chastity chucks a question at them: “What have you called your outfit?”

Hmm, now who’s going to win? A clap off will decide.

And the winner is…

[Message us if this is wrong and our notes are deluded]

Chastity: “Are you ready to be seduced?”

And on she comes: rickety, crotchety, hot-pocket-rockety…

She hasn’t changed, she’s still in her tabard.

“I didn’t want to get too excited…”

“I’ll help clear the dust off your willy,” says Tina to one man. “…you look like the Edge from U2!”

Ah, but a third man has completely taken her. She’s smitten.

“I need to find a man from the audience … who should I choose?”

Oh, this is easy for the audience…

Ahh, now Tina’s happy with this. Taking Chino by the hand, the couple walk back onto the stage.

“Come on, sit down. Hmmm, I’m going to put you in my rucksack and carry you home … we know by this I mean my vagina…”

“Hmmmm, you look like Zeus to me … Chino Zeus…”

“Are you easy to seduce, Zeus?”

Before he can reply…

“Down with it…” Tina starts to sing: What’s love got to do with it

Tina rolls around on the floor…

The audience is going elaborately crazy!

Tina takes her slippers off: oh she can move much faster now! And she does!

Shaking her ass-shaking her legs-rocking those thighs…

Tina pulls a neat little trick out of the bag [not a euphemism]. Tiny steps dancing sideways across the stage – amazing!

She has rocked the house!

And to calm down she’s going to end her act by making some tea. Romantic tea for Chino Zeus.

“I love you, Zeus, you brought me back to life,” says Tina as she departs the stage…”

Chastity: “I love her! She warms the cockles of my cold dead heart.”

“We’re nearing the end of the show, but we do have time for one more act. Give it up for…”

Ohhhh, Folly Mixtures are dressed up as the Ghostbusters! Baseball caps, ghostbusters jumpsuits, proton packs and some hi-top trainers.

And they’re dancing synchronized dancing … how cool! But they’re quick, so we’ll have to keep up:

Leg tease! Suit off! Bra off!

And they dance themselves off!

Lol, and here comes Madonna Mae Lenman to clean up the slime…

Shake of the head!

She’s not going to! It’s just too slimy.

And with that the show draws slowly to a close…

Chastity has one more song for us: a serenade to lift us onto the promenade…

“I wanna dance with somebody!”

“I wanna feel some heat with somebody!”

“Dance, with someone who loves me!”

So there we go, Ladies and Gentlemen. The Hundred Watt Club 80s fiesta: righteous, radical … it was an absolute riot…