Cruising was released in 1980 to much furore.  As a film, it’s quite possibly the Queen of ambiguity.

Besides a 1990s VHS release, the film was largely stashed away in Warner Bros vault for a couple of decades before its director, William Friedkin, oversaw a re-release and DVD special edition in 2007.

So much has been written about Cruising since its release that it’s difficult to add anything new. It’s been poured over by amateur movie buffs and professional film academics alike. But then by its sheer sense of ambiguity, it’s actually easy to find something new about the film to talk about. It’s a movie that’s prime ripe for personal interpretation, and certainly worth an exploration. And Hollywood doesn’t produce that many of those.

Not only does it include the sight of Al Pacino getting high and raiding the hell out of the dance floor, it also includes this beautifully immortal line up dialogue:

“You ever been porked? You ever smoke a guy’s pole?”

Cruising’s plot is relatively simple. Al Pacino plays Steve Burns, a cop sent undercover into New York’s gay leather/S&M underground in the hope of drawing out a serial killer who has been murdering men in and around the gay bars, peep shows, and hotels of the city’s meat packing district.

The most important element of Cruising isn’t its lightweight plot line (that shrivels and dies on vine, as it happens) but it’s the fact that it’s a document of an era that doesn’t really exist any more. Or at least not in the way that we see it in Cruising.

Cruising is a fascinating film – quite possibly one of the best for tone and atmosphere without anything really happening. We’re in this world and there’s no coming up for air. In this sense, it’s kind of like wrapping the audience inside a gimp mask, tying them up, and then pushing them face first into somebody’s asshole.

Sexual deviance aside, quite possibly the most important scene (spoiler apology) is the way that murder suspect ‘Skip’ is literally taken apart piece by piece during his police interrogation in the same way as the Lincoln Continental is shredded in Friedkin’s Oscar-winning The French Connection. By the end of it, Skip’s sitting there with nothing left to give. It’s a strong scene. Harsh, physically and verbally violent, and surreal, thanks to a big cop in a jockstrap.

For me it’s the key scene in the movie. It’s where everything makes a little more sense. In The French Connection the dismantling of the Lincoln leads to the prize, the answer, the truth; the Heroin and the group of drug dealers. In Cruising, the dismantling of Skip reveals no prize, no answer; the only truth being their own brutality as human beings. Which ultimately leads to nothing but further questions. As the Chief of Detectives says ‘you got the wrong guy.’

Cruising really does have its moments where it works (like the above), it’s just a pity that it falls down on so many other levels. Imagine a film containing this subject matter made at the same level of quality as The French Connection? In its small moments of triumph, you can just about see the possibilities.

It’s almost as if the film unfolds so many little questions below the main plot, that this is in actual fact what we’re supposed to be looking at and thinking about. The talking points aren’t the main plot points, who did what, where, when, why and how, but what is going on. What goes on behind closed doors, good and bad.

Cruising, when you remove all its sexual pyrotechnics, wicked fun or controversial dressing, poses questions. It’s not often that you get a film that is both silly (hanky code scenes) and brave (interrogation scenes) at the same time. In many ways the film is about man’s treatment or mistreatment of man. Friedkin often talks about the good and evil in all of us, and Cruising is no different. In one sense it asks the question, what actually IS sin? Is consensual whipping of your lover or sexual partner a sin? Is same-sex intercourse a sin? Or is forcing an innocent suspect to strip and masturbate a sin? Persecution because of sexual orientation a sin?

Pacino, along with Paul Sorvino and Karen Allen, are cold and aloof, troubled, we never really get into them as people. But then this works, too. They’re outlines with bruises, in it up to their asses.

Interestingly, one of the cops in the film is played by Randy Jurgensen, himself a real-life police detective who went undercover just like Al Pacino’s Steve Burns. The film also features Sonny Grosso (famous for the French Connection bust) (See the clip below for further insight from William Friedkin himself)

The problems with the film is that it has its moments of come down: a slightly schlocky slasher feel to its murder scenes, and the second half of its second act turns into a complete blancmange. You almost want the film to be about a half hour longer with a slower pace. More brooding, more absorbing, more characterization. It does, however, redeem itself in its excellent last five minutes. Well, for the most part it does.

But then if you take into account the interrogation scene and every little question that shoots out of that, does all the other stuff really matter?

In a funny side script to Cruising, the actor James Franco recently made a film called ‘Interior. Leather bar.’ It’s an interpretation of the missing 40 minutes that Friedkin cut out (since lost or destroyed) of the film’s original release. The story goes that Franco made the film, then asked Friedkin what was actually in the missing 40 minutes. Friedkin’s response? 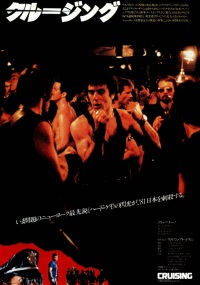 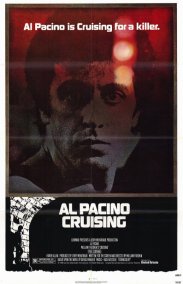