There isn’t any point in dressing up this review too much – it’s much better to strip down and get ever so hot and bothered!

A gorgeous and raucous rascal, headline act Lena Mae is pure crystallized lightning. More fun than a line of cocaine or a glass of champagne, she’s a beautiful little lady with a giant heart, dancing like a ten-foot titan. A titan that slinks, seduces, slithers and slides their way into your heart and mind and erogenous zones.

For her first act, Lena swooped in playing the satanic blonde majesty MACHINENMENSCH – a scheming and sumptuous tribute to Metropolis. For her second performance, she devil danced her way through Dirty Boogie – a raunchy old-time burlesque number with a climatic champagne outburst.

We interviewed Lena nearly a year ago and we have to say that she’s a zillion times more devious in the flesh. And more awesome, too. She’s a special girl and you can’t help but adore the lovable little kook. Back then we called her a ‘Whiz Bang’ of a woman. What would we say about her now? ‘KABOOM!’ What a gloriously magnetic bombshell.

Romping through the crowd to the tune of Where Eagles Dare, Betsy Rose brought so much of Russia to Neon Moon, that Vladimir Putin’s attempting the naughtiest of retaliatory land grabs – an en masse bum catching session.

All silly joking aside, Betsy Rose is a stunning Stolichnaya of joy. For whatever bizarre reason we hadn’t encountered Betsy Rose before, but fucking hell we’ve been missing out. That smile and face is incendiary. You can sink an armada of ships with such beauty. With her Russian mink and lace up underwear, Betsy’s performance suited the occasion. Her lack of a suit suited it even more so.

Buccaneering in through the gangway like a fetishist’s version of Blackbeard, the leather clad, thong wearing, S&M kingpin, Dave the Bear, is the ultimate badass. Actually he’s like Teddy Bass from the movie Sexy Beast’s distant firebrand brother.

Spending the night busting and gyrating with the crowd, Dave stripped down so fast that Black Cravat got a face full of the Bear in all its glory. For his later performance, Dave unveiled a Viking crown, a swishing ponytail, a men’s leather skirt and a modesty covered in tinsel. I think even Ruby Truelove got a little bit hot and bothered during that one.

We said in the intro about a ‘a lusty helping of borscht’ and Below The String is exactly that. Usually wandering minstrels make me want to holler (not in a good way like Marvin Gaye), but their act was fantastic … especially when they turned a small section of the bar room into a Russian Cossack dance floor. Now that would be a cool future arrangement.

The same can be said of Daisy Black and Alex The Mind Reader. Sometimes a little change of pace can be cool. Fast and furious and just a little bit maniacal, Daisy’s a nuclear genius with those hula-hoops. Alex, on the other hand, is almost innocently mischievous with his mind reading.

Speaking of sunshine, this write-up wouldn’t be fulfilled without Des O’Connor. Not the perma-tanned TV host, but the compere of the show. Unlike the television version, this Des is a devilishly sexy linguistic lothario – vodka soaked and searing with orgasmic verbal seductions. Dressed up like an 19th century artilleryman who humped his way through the Battle of Waterloo, Des is a big bad fuck on legs.

Aided by the steamy and 1000% infectious Ruby Truelove, Des delivered a performance that involved him dancing around like a blood-crazed lunatic while singing about cracker factories at Christmas. It was the dance of the devil if the devil was Rasputin.

So after all of that good mannered mayhem, I do believe we may well have shot our wad.

There you have it, Ladies and Gentlemen. Neon Moon…sexy as f***.

P.S. It’s always great to see a little bit of latex being worn – loved that dress whoever was wearing it.

MG was at The Neon Moon Burlesque and Cabaret club 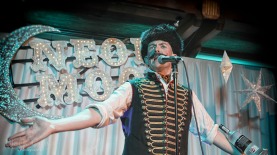